An Alabama district attorney has decided to drop the charges against a woman who was indicted for manslaughter after she lost her fetus when she was shot during a fight. 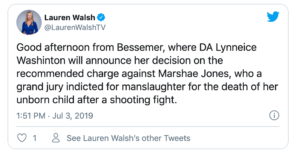 Marshae Jones was arrested June 26 after a grand jury concluded she intentionally caused the death of her fetus by initiating a fight with another woman.

Jones was five-months pregnant when she was shot in the stomach in a December altercation.

Jones’ attorneys filed a motion Monday asking that the charges be dismissed. They called the charges “completely unreasonable and unjust.”

Advocates for women’s rights expressed outrage over the arrest, calling it another attempt to charge women for crimes related to their pregnancies.